Stag Energy has been focused on energy security and system balancing services since the foundation of the company in 2002.  Gas storage has always played an important role in overall UK energy security and Stag was instrumental in working with Government to establish legislation suitable to support the development of Carbon Capture & Storage, Offshore LNG and Offshore Gas Storage (Energy Act 2008).  The Gateway project subsequently secured the first Offshore Gas Storage License in 2010.

In association with the Lundin Group, Stag secured rights with Crown Estate to the offshore area which the British Geological Survey endorsed as the best salt structure in the UK for the construction of storage caverns.  The Gateway Gas Storage project invested in extensive sub surface data acquisition and analysis, completed the necessary environmental, engineering, design and planning work to prepare the facility for construction.  As the UK moves towards a low carbon future, the roles of natural gas and hydrogen will become increasingly important to secure a stable, reliable and affordable energy system that will significant storage volumes to provide security of supply.  The Gateway project is ideally situated to provide such services in the future. 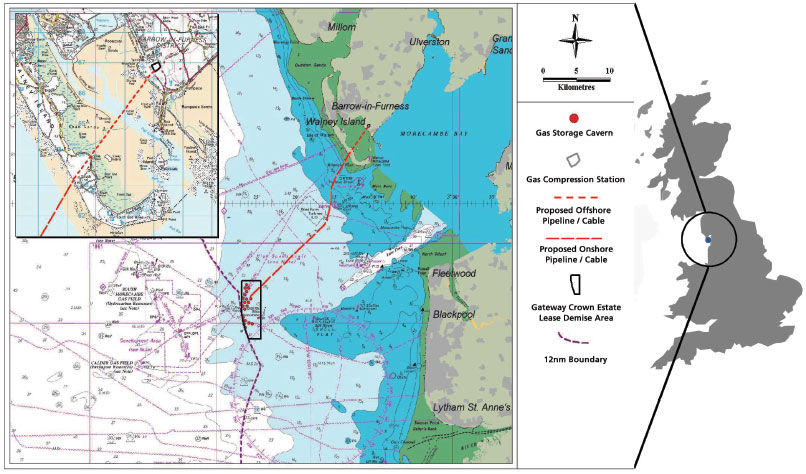 Design and technical work has taken place over a period of years, with Extensive geological and technical surveys has been undertaken over a period of years including a complete core of the salt formation (~600m or 2,000 ft) at a depth of ~750m beneath the seabed. Comprehensive 2-D and 3-D seismic data has been gathered and analysed to support design work and an in-depth FEED programme with technical input and expertise provided from, amongst others, Petrofac, Amec, PB Energy Storage Services and the British Geological Survey.  The work confirmed the ideal characteristics to support salt cavern construction with extremely low permeability and insolubles at this location.

Salt cavern technology is well proven and has been used for storing gas and liquids for several decades. Gateway has the potential for the development of up to 40 caverns with an average spatial volume of approximately one million cubic metres – each with the capability of storing around 75 million cubic metres of working gas.  The scale of the Gateway prospect provides the potential to support the development of the North West Energy and Hydrogen Cluster (https://northwestcluster.co.uk/) and would provide the necessary security to balance the evolving intermittency from a growing level of renewable energy sources.